Going into the race, I didn't feel quite ready for a 70.3 distance. I hadn't been training consistently this year due to illness or the most recent rib displacement..was feeling very doubtful due to lack of consistency. Spoke to coach about maybe not doing Oceanside this year and he looked at me as if I was crazy to think such a thing. According to him, I should still go and give it a try.. at the very least I would learn something... even if it was extra level of pain. Anyway, race morning approaches and here it goes...

Upon arrival, my priority was finding out what the water temperature was-- 59F-- sweet! Anything above 56F is good enough for me!
Swim- 56:25 - officially my slowest swim time for a half- i know your eyes are bleeding- ouch! (51:04 last year). swim was a bit rough once the guys behind me caught me and on the way back was probably not swimming in a straight line.. AND not consistently swimming as of late due to rib may have had an overall effect? AND to the guy who kicked me on the right side of my goggles with your breaststroke kick-- come on buddy!! Waters were too rough to be breast-stroking it!

T1- 5:34 (7:38 last year) - took 2 minutes off my T1 :-)
Bike- 3:32:14 (3:31:15 last year) Oh the bike was windy!! Windy! I had real trouble getting my heart rate into z3. I spent most of my time in mid z2++ bordering into z3. I had a tough time getting my heart rate into race zone even on the climbs but I didn't force it.. just went with it and worked with what I could.
Wind was unexpected compared to last year but just put my head down and got through the mid section - Camp Pendleton- in the shortest time I could. I did have enough in me to speed up on the last section and into T2. 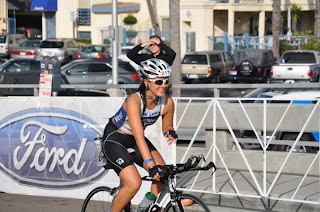 T2- 3:13 (4:07 last year)
Run- 2:24:30 (2:23:23 last year)- confession this includes 3 potty pee stops!! I tried to run and pee but couldn't do it. Run felt TOUGH for me but my mantra was "the fastest way home is to run" and that's what I kept repeating to myself especially during the second loop when knee/hip joints were starting to sore.My neck for some reason was really kicking in with soreness.. maybe because I felt the need to keep my back straight during the entirety of the run due to rib? On the flip side, may have helped with my run posture! 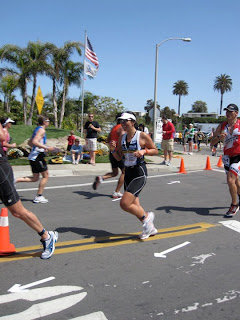 Overall- Mixed feelings. I am not thrilled with my time on the other hand I know I haven't been training as consistently. So mixed feelings.. I know I have better in me but just not yesterday...onward to IM St. George! According to my coach, I am going to give that a go as well!
Posted by IronYi at 8:58 AM