I think that's officially my longest IM swim time to date! I swim like a tank but my last Canada swim was 1:30:00. I never get cramps when I train or at races but apparently someone had different plans for me this morning... halfway through the swim.. calve cramps... and now my swim has turned to a pull. Well, that's great. And then I started to bonk.. that's even greater!! Valley- cramps & bonking. Peak - foggy goggles cleared up around the same time cramps started... not sure the trade off was worth it!

Oh the bike.. mentally I was really good.. physically .. not so good. I started to replenish calories early on in the bike and hydrating as well but realized that I had not pee'd during the last 4 hours of the bike AND i wasn't sweating.. just radiating heat. Neither of these has ever happened to me before. I was also starting to feel very sleepy & tired.. instead of being on my bike.. I wanted to just curl up in a ball and take a nap! The last time I did this race, I thought Yellow Lake was the worst of the two evil. It could have been because it was hailing two years ago. This year, I am thinking Richter Pass definitely wins. Valley - feeling like I had heat exhaustion. Peak - Hearing a tire blow and thought it was mine except it was the tire of the van driving next to me- phew! Missing a deer crossing the road by about 5 feet as I was looking down at my bento box trying to decide what I should consume next.

The run... got to the first aid station.. stopped to grab my cup of Perform and immediately started having dizzy spells. I've never had dizzy spells at a race before. Hm. By the second station.. I started on the coke, the chicken broth and water. The run was the run.. I had a steady shuffle going on for the first half .. as long as I wasn't standing still I was ok and then blisters kicked in with new orthotics that my foot doctor "doctored" up to help relieve toe pain I was experiencing. The best part of the run was seeing all the familiar faces. It was so great to see friends Jerald Balgos and Bill Shen out there supporting! Saw my friends Pia and Sandy rocking it out on the run course. Saw my friend Jennifer Huston from AZ!! Immediately behind Jennifer, I saw my friend Ben at an aid station. We were at different aid stations across the streets. Ben and I met through Team In Training in the Spring of 2007. I was his mentor. He told me last year that he wanted to do an IM. I had already told myself I am retiring from this but I couldn't let Ben do it on his own!! Anyway, I saw Ben and yelled out, "Hi Ben!" He yells out in return, "I hate you! I hate everything about you! It's your fault I am out here." I yelled in return, "This was YOUR idea! It's your fault!"  I am sure people around us had a few chuckles at our minor aid station spat. Valley - Continuation of the physical issues.. dizzy spells. Peak - seeing my friends and the finish line. 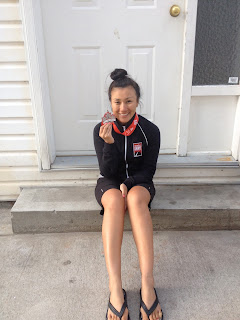 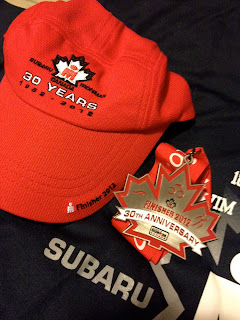 Total - 16:00:54 -- Crossed the finish line with I think the biggest smile I've ever had at a race finish line. Thank you to Sandy for being my post catcher caretaker! And Ben's wife, Joan for picking me up. What a journey today was.. definitely more valleys than peaks.. my mantra was "be brave.. no pity parties.. keep moving forward." The town of Penticton i truly special. I think the volunteers is what makes this race what it is. There is not an event with a community like this one! I wish Challenge Penticton the best of luck!! Ironman #5 was a tough one to get.. and now I sit here consuming sprite and toast due to a queasy stomach..hopefully that subsides as I plan to eat EVERYTHING and ANYTHING I want today!!