Week 20! This week of workouts wasn't as great as it could have been. My knee didn't feel normal until about Thursday so that kind of slowed me down a bit. Looking at my training schedule for next week, I'll definitely pick it up! Other than my bum knee from my little fall off of the trainer, my training has been going very well! I am feeling stronger every week and probably the strongest I've ever felt since catching the triathlon bug again (Summer of 2006)! The weather this weekend was not very cooperative..running along Crissy Field always cheers me up no matter how gloomy the day is! I saw many tourists out..standing by the edge of the cement balconies..waiting for the waves to crash up and over..! These are the times when I feel most lucky to live here!

I haven't talked about my fundraising in awhile or ever, huh? As many of you know, I am training for my first Ironman in support of the Leukemia and Lymphoma Society. I've made it my goal to raise $10,000! To date, I've raised $6,870! I'm 68% there folks..help me help out the Society by donating to this very worthy cause by clicking on the below link! One person can't cure cancer but put a group of semi Type A personalities known as Ironteam reaching out to folks like you and we might have something..or at least a shot at being a lot closer to a cure! Just think...one day..a vaccine for cancer?!

For the sake of Valentine's Day, I offer one of the most profound quotes I've ever heard from a wise man. "Look" he says. "The most important job for a man is to find the right woman. It's the best we can do..our job is to pick a caring, smart, mindful woman." Like I said...profound..right?! Alright..enough of sentimental Yi...back to IronYi! This week's workouts consisted of a great run along the Golden Gate Bridge...getting launched from my bike trainer...awesome! Read on..

Training this week went really well especially considering I ate 3/4 of a big bag of dark chocolate peanut M&Ms! I did! I went to M2 spin on Tuesday and pushed out some milestone wattages! M2 would be proud if he had been awake to pay attention :). Although, he probably wouldn't be happy until I pushed it up to the 300s which I don't really foresee it happening anytime soon...or ever...well maybe for like 2 seconds! Wednesday AM, I met Hez at the track! It was 6am and we were standing around wondering why the track was closed...we b*tched about how they need to post signs and stuff if the track was going to be closed. Sure enough after minutes of complaining...we noticed the little letter size sign about pesticides and track closure for the day so we drove over to the park and did our little run there instead! Started our dark but finished with a pink sunrise!

Wednesday night came around and I had tickets to the Suns and Warriors game!! I've been talking about going to a Suns game for ages!! Finally!! Danny (best bud from high school) and I were stoked to get our hands on some sideline club seats! Sideline club...we get our own concession area...own bar area..not that I drink but it was a nice to know! I said to Danny, "Now the only other seats I'd be willing to sit at would be court side!" It was a great game...,down to the wire. Suns lost by 2 but it was great to be able to see Nash, STAT, Diaw, Raja, Shaq, Van Gundy's bald head, Coach D'Antoni and even spotted Dan Marjile! Oh..saw the Warriors players too...Jackson.. Croshere..Harrington..Davis..Monte..Matt Barnes..Chris Webber not suited up. It was great! Suns lost this game but they whipped on the Mavs the next day! That would be the best Valentine's date or any date ever..a great Suns home game! Take note guys :)!

Phoenix Suns during the National Anthem. 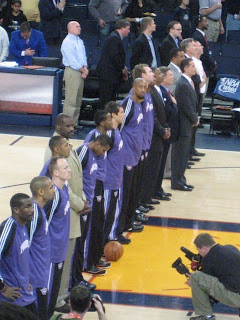 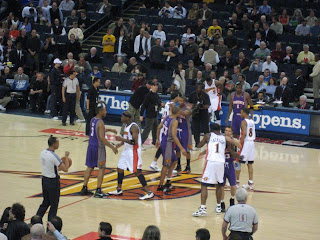 Thursday..I went to my core strength class and it kicked my @ss. Friday..I put in 3000+ yards at the pool. Saturday..Hez and I had an awesome run that started at the Marina Green...across the Golden Gate Bridge..into Sausalito and back. That was such a great run and I've never walked or ran across the bridge in all the years that I've lived in SF! Highlight of the run aside from the run itself, passing a girl that was riding her bike up a long but slight incline of a hill! I giggled and said to Hez, "We passed someone on their bike.. running! "

Sunday..um..let's see...I didn't go out on Sat. night because I had to be in Danville at 7am for a double brick workout! Sorry Annie to have missed your b-day party. I had one heck of a training morning..as I was driving to Danville..my front tire that was in my car started to deflate..great..I have a flat! At least it wasn't while I was riding! Then as we were warming up on our trainers...apparently my bike wasn't secured into the trainer so I got launched from it! Ok..launch might be exaggerating a little but it does make for a better story! What would have made for a great story is if I had taken out my row of teammates! Now, that would have been awesome! Haha. I didn't think that I got any boo boos from it until I continued to warm up and saw signs of red...for a couple of band aides from Coach Alex and I was good to go. Our double brick workout consisted of a 20 mile bike and a 30 minute run..then repeat! Hez and I hauled @ss on the second 20 miler and was able to improve our time by 4 minutes but the second run was pretty painful because of my now heavily swollen knee. Hez kept telling me to slow down because I was shuffling so fast while thinking "ouch"..."ouch"..."ouch"...in my head. After the workout, I headed to Ted and Mai's place for a great mentor group brunch but not before stopping by home for a quick shower and cleaning of the wound. Brunch..cinnamon buns of all sorts...eggs..fruit..yumminess! A great weekend of workouts!

My left knee is now double the size of my right knee but I am okay and hey..I still did and finished my workout...I think that deserves some "tough cookie" points :)!

I had a tough time getting motivated during the week because I had a lot on the mind and of course work but the training week ended with a bang! Coming off of a great weekend of workouts! I have not ridden my bike outside in awhile due to the weather conditions so I was very excited to be able to do so this past Saturday. Hez texted me on Friday night telling me that she wasn't going to go to the workout because she had a late night. I texted her back, "Suck it up!" Nothing but love!

Not knowing how long our ride was going to be Saturday morning left me wondering if it was going to be an easy day for me or whether I would be f*cked. Yes, I've had an increase in the potty mouth since I started doing this triathlon stuff! The Team rode the Pig Farm Loop in the East Bay and what a beautiful day it was! I wish I had a camera with me considering the scenery that we were able to enjoy throughout the 35 miles of our challenging ride. Pig Farm Hill itself is three short but very steep climbs and with the headwind, I was riding at 3mph. Not kidding! I literally thought that I would fall off my bike! I don't know how encouraging that is since I consider the bike to be my stronger leg of the three. I didn't know whether to look up or to just look down..I chose to look down and just pedal on..wishing it would be over soon! The most tedious part of the ride had to be the bike path that appear to be about 10 miles long. That was torture- I would rather do Pig Farm again if it meant that we can skip the bike path! After the bike, we did a short run and called it a day!

Sunday was an intense swim workout which lasted just short of two hours. With the sun shining bright, my tan lines are back! I am starting to feel the build phase of our training schedule. At this very moment, the thought of going to work tomorrow is a bit daunting because I sit here feeling very sore and exhausted!

Oh by the way- I got into the Escape from Alcatraz Triathlon! For those of you who are not familiar, you get into the race by lottery. I didn't get in last year and this year, I didn't get in during the first round of lottery picks but I found out last weekend that I got in on the second round! What does that mean? Now, I get to add Escape to my list of training races. Oh deck for this year is the Wildflower Long Course..lucky me..I get to one of the hardest half courses in the country twice..the first time being training weekend taking place at the end of March. Along with Wildflower, I have Escape in June, I am signed up to do the sold out Vineman 70.3 in July and I am hoping to find some non-wetsuit open water swim events to do as well! I'll probably do the Marin Century in August and that'll probably be the last big event before the main event- IM Louisville!

M2 class has been awesome lately! I finally convinced Susan to come join me for a class! Yi brings friends to class...Yi gets M2 socks! So this week was more double workouts...I workout in the AM...go to work...and then workout again in the PM...usually a run or something. I learned first hand this week how important having my recovery drink is..especially if I just finished a workout in the evening and I am planning on working out the next morning! After Wednesday night track, I went to M2 Thursday morning and felt sh*ttier than ever! result of skipping my recovery drink- lesson learned! I was in Colorado this past weekend and did a training run in Boulder and Colorado Springs with Haven (well..he showed me to the path and then off our seperate speeds he went!)- definitely felt the difference with the altitude. It was beautiful up there...a nice change of scenery from my normal run routes!

Speaking of running and track..can we talk a little about track ettiquette?! The track is like a freeway people...faster on the left...slower on the right! On Wednesday, there was a crap load of people out yet I want to say only about 25% of them knew of track ettiquette!! If you know you're going to stop or slow down...MOVE OVER to the right but don't just stop! And what's up with the people that like to do group lunges in lanes 6-9?! Seriously people?! Really? There is a nice space up top!! Lots of it! The track is for running!! As long as there are lanes...it's for running..jogging or walking! I am normally not a track snob but man Wednesday was just annoying and with the Spring Tri Team coming out to the track soon...it's going to be a mad house with all 100+ of them!

So who is Louie Bonpua? I've been asked that by quite a few of you who read my blog last week. In short, he is one of the most inspirational not to mention brave Ironteamer you will ever hear of (no disrespect to our honorees)! The video below says it all!

If you're ever in search of inspiration..you'll find it with this Louie video!