Felt under the weather this week with a very sore throat and a flu headache so took it easy this week.

Wishing you and your families a Merry Christmas! Also wishing our fellow Ironteam teammate, Marc a speedy recovery!

Posted by IronYi at 6:43 PM No comments:

Week 10! This week's workouts started very mellow for me but then it quickly picked up by Friday and into the weekend!

On Friday, I went out for a long 72 minute run. When I started, it was pitch dark and by the time I finished my run, the sun was rising.
The Golden Gate Bridge at 6:15am ish. 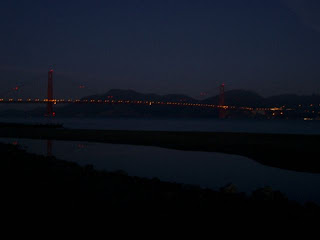 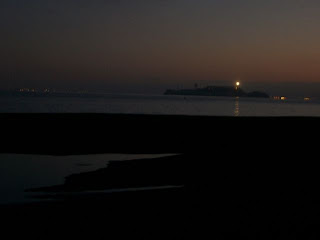 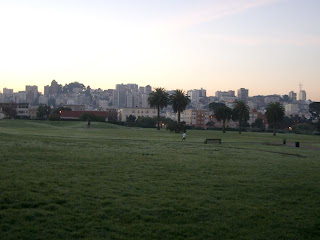 On Saturday, I attended a swim clinic led by Chris Hauth and some of his AIMP (Advanced Ironman Program) staff. Don't mis-understand! I am not by any means advanced haha but am motivated to improve and what I took away from the clinic was definitely helpful! We were there from 10am to about 3:30pm which made for a very long but fun day! The most entertaining thing that took place at the clinic was when Chris was trying to demonstrate the "inefficient" or wrong way of swimming such as elbow placements, stroke placement, etc. He tried to do it incorrectly, yet even trying, it was still somewhat correct. I guess you can't expect a former Olympic swimmer to swim incorrectly- it's just not possible- even when he is purposely trying!

Sunday was a good day on the bike! I reunited with Mary Ashby, who I met on the TNT Summer 06 Triathlon team, for a bike ride. We rode Alpine Dam from Mike's Bikes in Sausalito. I had forgotten how long those climbs were! I kept asking myself..when is this going to end?!?! It was quite cold once we got up and over the hills into the dam..like Mary said..I guess they don't call it "Alpine" for nothing! 39 miles later..we were back at Mike's Bikes ready for a hot chocolate!

I have some great news to share about a very special person who has provided me with more inspiration than he will ever know! He is a TNT honoree that goes by the name of Todd Elliot. I met Todd during the Spring season of 07. Todd was diagnosed with CML (Chronic Myelogenous Leukemia) in January of 06. After four months of treatment, he joined the TNT cycle team, trained for and finished the Honolulu Century! Todd went on to train for and finish the Wildflower Long Course this past Spring! During the Summer 07 season, I had been trying to convince Todd to join Ironteam with me! I thought, if I can convince more people to join, I will more likely join too! One day at Kezar track, he told me that he wouldn't be able to do 08 but maybe 09. Ironteam 08 was not going to be possible for him because his body was starting to become immune to Gleevec (the "miracle" drug for CML which 1/3 of the funding came from the Leukemia & Lymphoma Society) and that he may need a bone marrow transplant early next year. He wanted to spend the rest of this year camping, hiking, going wine tasting and do all these things to get mentally prepared. I had a mix of emotions while listening to Todd as we're running on the track. Todd reminded me of how fortunate I am to be healthy and able. That track workout with Todd inspired me to register and commit to being on Ironteam for the 2008 season. I was inspired to give more of myself to make a bigger difference!
Todd during the run leg of the Wildflower Long Course- May 07 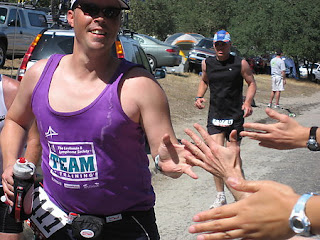 I just got some updates from you all, so I thought I'd give my own shoutout and give you an update on what's been happening to me.

To begin with, I've been a lazy bastard. While you guys are busting your butts with mini-tri's in freezing temperatures, I'm going wine tasting,camping, hiking, wine tasting and generally being a lazy butt.
The tail end of my year has really been defined by my preparations (mostly mental) for my upcoming transplant. Originally anticipated for the Fall, it got pushed back a little while we waited to see how I would respond to the medication they switched me to back in June. It's aweird thing to prepare for such a huge event like that. Preparing to take a year off work, researching and setting my expectations for the invasiveness of a bone marrow transplant, working with my friends and family to prepare for my own care.
But last week I got some good news. My medication finally kicked into gear! We finally started seeing a really significant response to the medication, and now because of that my transplant has been put on hold indefinitely. It's suddenly as if a curtain has been lifted to remove the darkness and shadows that veiled the weeks and months beyond Jan 1.
Yay!
To celebrate the good news, I'm getting back into gear to start ramping up my training for my second Wildflower 1/2. If all goes well, my original plan to do a full Ironman in '09 may be back in full swing!
So that's my good news. I just wanted to let you all know that you inspire me greatly and I wish the timing had worked out a little better so I could be out there training my ass of with all of you. I'm super proud of each of you and am rooting you all the way.
Best,
-todd

Todd and I at track: 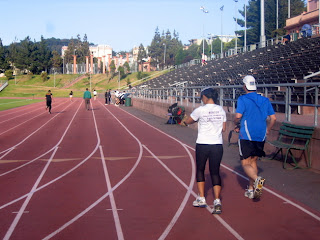 Todd's email made my day! It's great news and I couldn't be happier for Todd and for those who care about him. It's a nice reminder to myself and everyone that is involved with Team In Training that everyday spent training is making a difference..with the help and support of all of you!

This week was a light workout week due to the practice Sprint Distance triathlon scheduled for the weekend. I had a check up with Dr. Rabbetz and he said the magic words, "You're all better!" I am not sure who felt better about me being 100% healed!- me or him. He said something like, "It makes me so happy when I see my patients all better and me being able to help them do whatever they want..you're all fixed..see you in two months!" Sweet! I am sure my insurance company will be pretty happy about that as well! Earlier this year, when I was on the twice a week plan with Dr. Rabbetz, I actually received a letter from my insurance company asking me how I got injured and if there is a third party involved. No, there wasn't! It was just me..oppsy! We had Iron University Part 2 on Saturday. My two key take aways from that was 1. I need more sleep. 2. I need to consume for protein before my workouts in the morning. I'll give those two a try and see how that goes!

Sunday..our practice triathlon..could it be any colder?! Of Summer 06, Spring 07, Summer 07 and Ironteam seasons to date, there's only been two times when I actually wanted to maybe cry on my bike. The first time was during Spring 07 on one of our long bike rides. We rode Nicasio Valley..it was about a 60 miler I want to say? It was windy, gloomy, cold, windy and just plain miserable! For some reason mid-way through the ride, everything from the hip down was just in pain! Mark Smith was doing SAG that day and everytime he drove by, part of me really wanted to wave him down for a ride to my car but a larger part of me always said no no no..you're finishing! I was glad that I wasn't the only one to have a bad day on that ride, the amount of people that dropped F-bombs as they finished the ride was pretty amusing! The second time I wanted to cry during a bike ride was today at the practice triathlon and that was because my toes were in pure pain from being frozen! Well, today wasn't nearly as bad as that time during Spring 07, that would have been an all out boo hoo hoo cry. This time would have just maybe been a weak whiny wimpy "my toes are frozen" type of cry.

Temperatures at 7:30am was quite frigid- air temperature was 39 degrees! We went off in three waves determined by Ironman event. The swim was short but just long enough for your toes to start losing feeling. Between the bike and the run, I am not sure which experience was more unpleasant. With the air temperature the way it was, my toes and fingers went numb during the 12 mile bike ride! Hez (fellow Ironteam member) and I kept saying to each other, "Hurry up! Let's just get this over with!" During the 12 miles, I kept trying to move my toes but they were too numb to even budge! You could have stuck a needle in my toes and I probably wouldn't have been able to feel it. I am not sure which is worse- riding 12 miles with numb painful toes OR riding 45 miles with a bee sting to my left eye (during a training ride in Aug 07). My fingers were barely able to grip on the brakes during descends but I managed. By the time I started my run, both my toes and my ankles went numb. I rolled my ankle twice because I couldn't feel the foundation of the ground. Walked about half the run because of the numbness..yes it was that bad! About 1.5 miles into it, I was finally able to feel my toes again! Yes, it was frigid this morning but it could have been worse. It could have been 39 degrees AND raining! Now, that would have REALLY sucked! Below are two pictures from the practice triathlon. 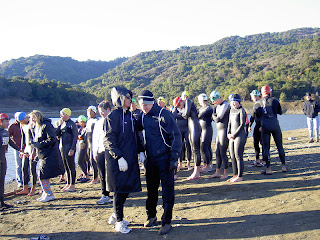 This picture was taken during the run- the shoe you see on the right hand side of the picture in front of Hez..that's my shoe! As Hez and I were running.. we noticed something rather funny and scary.. a sign by the reservoir which read "No swimming. No wading." We thought....hmm?? 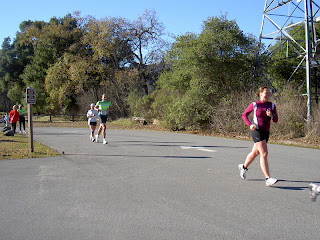