And then there's the race plan from my beloved friends who often make me laugh. The night before the race, I was sent this plan from one of my good friends:

Find a mean girl and pass her! Find a muscle man and drop him. Find a hottie and chase him! See a sister struggle and pace her. Remember your smiles and use them! See the hills and roll with them. See hottie you chased post race and pick him up! Then catch up with the Killian's and spill it.

Think that about covers it, have fun!!
xoxo 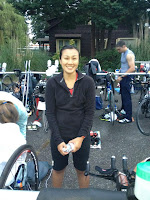 The great thing about doing a race with a bunch of friends is that you're never really alone. Ben and I drove in together.. with the best $20 bucks I ever spent on a parking pass. Phil & I headed out to the swim start together and then my friend Maureen & I started our swim wave together. Onto the swim..

Definitely swam more than 1.2... it was a little hard to see for me both going out and coming back in. What can I say? It's the swim.. I am a tank in the water.. I just try to get through it.

BIke- 3:43:46 - Avg HR: 157 Max: 169 - Here we go... it's officially raining now.. but also the most fun I've had on a bike course ever. I was able to keep HR in Z3 during the entirety of the ride with the exception of some downhills and uphills but was able to either bring it up or down back to z3. I don't think I've ever done that on a bike course before so that was positive! some dodgy sharp turns here and there but managed to get through and even max'd out at 45 mpg on a descend... scary.. don't look! I took the climbs easy and went for it on the descends + crests + flat parts... bike course was all round fun.. i was mentally in a great place (what rain?!) and maybe one of the hills felt significantly tough towards the end but other than that, great bike course! Notable mentions... 10 miles into the bike.. this guy rolls up next to me and says,"nothing sexier than a woman that knows how to snot rocket!" Ha ha you know it! Don't get so close to me bud! The day before the race.. my friend Ben and I drove the bike course and noticed it was a course full of hairy turns. This was a technical bike course.. one of the turns was a sharp right into a wall of an uphill.. a long steep one at that. Mean! Through the bike.. I was anticipating this one sharp turn into a wall... every right turn we made.. i was ready but was met with many false alarms. It would come towards the end and a lot later than I had anticipated. There were a few folks who were having issues and I tried to give them some verbals encouragement as I pass them. This one woman and I played the cat & mouse game the entire time on the bike. She would kill it on the hills as I took them easy and then she would coast the flats and descends as I went for them. She'd get irritated and grunt every time I passed her... which spilled over on the run.. except I was able to finally leave her and her grunting for good during the second half of the run.

Run- 2:37:05 - Avg HR:151 Max: 163 - oy! I had two issues on the run: 1. i didn't feel like i had the "power" to push for faster 2. i have this bunion on my right foot that's getting a bit worse and showing itself on the run.. almost makes the bone that connects your big toe to your foot want to break or that's the feeling. Anyway.. i know i can run faster.. i feel like i can run faster but didn't have that oomph... does that even make sense?? I had a little tough time breathing the first half but figured that was normal. My younger sister showed up to watch me race and I saw her when i started the second loop of the run. My sister who is twice as outgoing as I am, bursted up from sitting on the curb and started excitedly asking me all sorts of questions and I gave her five words, "I don't want to talk." Crazy girl! Looking forward to the day she does her first triathlon!

Photo below: with my friend Ben and with my sister Tammy. 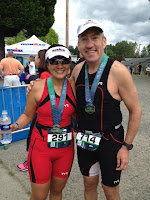 Overall- 7:21:45 - no PR here but I think it was one of the more fun races and I was mentally in a great race for most of the race. It got a bit iffy on the run and the swim well i just try to get through. No nutrition problems felt. No mechanicals. Stayed upright. Fun good race!
Posted by IronYi at 6:56 AM No comments: