Guys really don't like it when they're passed by a girl...
This week wasn't a recovery week but my body was telling me that it should have been. Yup, still feeling the race fatigue from Oceanside. Coach said it was normal since it was the first race of the season, the body was in a little bit of a shock, more of a remainder for the body that we're racing.
Speaking of Coach, man did he bring it to CT class last Tuesday. Oh my! After warm up, he said, "this is going to be hard. be ready." Or something like that and he was not kidding. We did a 30 minute interval with 80% of effort as our rest. We spent the entire 30 minutes fluctuating between 80%, T1 (100%) and 120%. I was never so happy for it to be meter time and even then, I didn't want to get back on the saddle for part II of class. Part II consisted of a 20 minute interval fluctuating between 80% and 120% which my legs somehow found it to be easier. That day, I ate enough for a family, my metabolism was going bonkers!
So what is it about guys who can't let it go when getting passed by girls on the bike? I mean sometimes, it happens. What's wrong with just letting it go and just ride? Saturday, Kara and I both had to do an easy effort 4 hour ride. I call it easy effort because we didn't have any zone 3 pick ups- it was all strictly zone 2 and below. Anyway, I'm climbing White's Hill going from Fairfax out towards Nicasio and I hear this huffing and puffing behind me throughout the second half of this pretty good climb. As soon as we hit the descent, the guy passes me. No biggie. He is heavier than I so gravity helps him out a lot more than me on descends. Surprisingly, when we got to the flat, I caught and passed him- not that I was trying to because I am not that speedy but my cadence was faster as his was slower so naturally, I passed. I must have lit a fire under his @ss as I passed him because sure enough, he picked it up and as we made that right turn at the golf course to get onto Nicasio, he got out of his saddle and started hammering up. His heart rate must have been going bonkers and as he made his way up the climb, he looked back. Silly guy! Have a good ride!
A few photos from our Saturday ride- choice..choices..how lucky are we to have these routes for training! I took this picture while waiting for Kara to come back. I stopped when my bike computer said 2 hours in ride time for the turn around. Kara saw boys, followed and kept going. Ha ha. 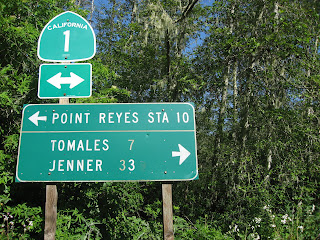 Kara and I at Nicasio Ranch- we're so color coordinated! Wanted to go to Sea Otter this weekend but had to stay and train with CDA right on our heels so instead, we supported the AC guys by sporting their jersey! 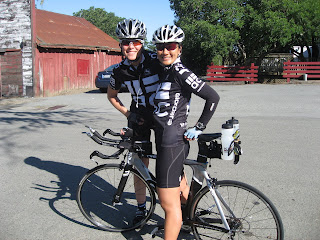 So four hours later, Kara and I are back at the parking lot in Fairfax where our cars are parked. As soon as we got off our bikes, we started squealing like little girls... "ew"..."gross" as we wiped all the dead bugs off our faces. And let me tell ya, the bugs were out in full force on Saturday! What a beautiful weekend for training this was!
Workout Summary-
Swim- 3 hours and 40 minutes
Bike- 6 hours and 53 minutes
Run- 3 hours and 15 minutes
Total Workout- 13 hours and 48 minutes
Posted by IronYi at 2:45 PM

ya... i passed a guy running yesterday and he immediately picked it up to pass me again... i chuckled figuring another half mile i would pass him again and well yes i did.... to then havehim sprint up again to pass me... dude... really? are you seriously doing this?