Lack of structure.. lack of productivity!
I had this entire week off of work as the company shut down for the last week of the year and I thought that I'd check off all the things on my to-do list and be on top of my training... wrong! Clearly, for me, as I have found out, I need structure in my life in order to be productive! Along the same lines as.. if you want something done.. ask a busy person to do it! I stayed in bed.. longer than I should.. in my PJs for hours.. putting things off.. then next thing you know it's bedtime again and oh look.. it's January 4th.. have to go back to work! But hey, I had a good New Year's and I hope you did too! 2009 was really good to me.. is it too much to ask for 2010 to be just as good if not better?!
Photo below- Mary and I @ Nick's place for NYE! 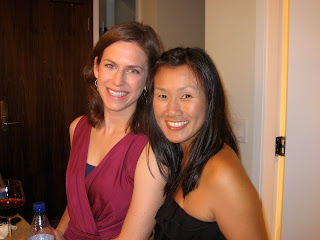 photo below- the gals @ Nick's! 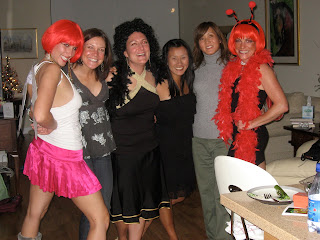 While my week of trainings were not as good as I had hoped for them to be, I did start my New Year with a 2 hour compu-trainer class in the pain cave with coach and let me tell you.. it was pure pain! Put my head between my knees to help "my nauseous I think I am going to puke feeling" type of pain!
Speaking of pain.. the Ironman.. there's been talk that Lance Armstrong is going to race in 2011.. he turns 40 that year.. and it's in October.. the month of his new birthday after being in remission of cancer. Talk of him doing it turned into talks of him winning it. Triathlete Magazine was stirring the pot a little with this clip here:
Now, some would say that Macca is cocky and doesn't know better to have possibly angered Lance. I've been a Lance fan for a long time. I have every one of his Tour de France wins on DVD and I've even kept his SI covers. Having said that, I completely agree with Macca's comments re: Lance's chances of winning Kona. For those that disagree and think that Lance can win.. are you kidding me?! First of all, that would be hugely disrespecting the top guys at the IM level. Secondly, Lance may be a great cyclists and even a good runner but when was the last time Lance had to do a solo time trail for 8, 9, 10 hours solely dependent on himself? Yes, he ran numerous marathons quite well but he also had an entourage pacing him and telling him when to take in a gel, etc. Do that at an IM and you're DQ'd! Solely running a marathon and running a marathon after 112 miles on the bike is night and day! Bottom line, Lance at Kona will be great to watch and NBC's ratings will for sure shoot up but a win for Lance at the World Champs.. I wouldn't bet on it. And why are folks pissed at Macca for saying what he thinks and giving his honest opinion?
That's it for this week.. Happy New Year!
Workout Summary-
Swim- 0 hours and 0 minutes
Bike- 7 hours and 50 minutes
Run- 1 hour and 30 minutes
Total Workout- 9 hours and 20 minutes
Posted by IronYi at 7:09 PM

So who actually disagreed with Macca about Lance not winning Kona? I would think even Lance would agree he would never win Kona.

a lot of ppl! you can read the comments on this link- http://triathlon.competitor.com/2009/12/news/video-chris-mccormack-on-lance-armstrong%E2%80%99s-chances-of-winning-in-kona_6503